Get the holiday weekend kicked off right with a live performance from national recording artist and local icon Eric Van Houten. He brings his country flare to the Ebenezer Ale House on Friday December 22nd for an intimate performance starting at 9pm. Stop by to enjoy the show but get here early to grab a seat and take advantage of our great happy hour specials. 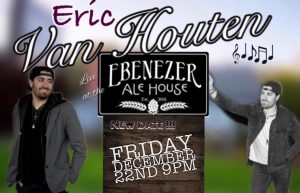 Celebrate Christmas at the Ebenezer Ale House with our annual Christmas Customer Appreciation Party on Wednesday December 20th starting at 3pm! All day long we’ll be celebrating with holiday spirit, giveaways, and a visit from Jolly Old St. Nick himself! Bring a new, unwrapped toy to donate to children in need and you can take advantage of Happy Hour pricing from 3pm – close! 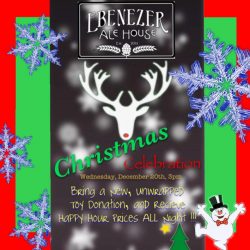 Harpoon Brewery and Buffalo’s own Big Ditch Brewing Company have teamed up to celebrate their friendly rivalry with a collaboration brew known as “Rivalry Pale Ale”. Rivalry Pale Ale comes in at 4.7% ABV and is made using locally sourced NY malts and Massachusetts hops. They’ll be making their way to the Ebenezer Ale House on Saturday December 16th for a sampling of their concoction starting at 7pm. Stop out and enjoy their brew as you celebrate the holiday season and catch the Saturday night football games. 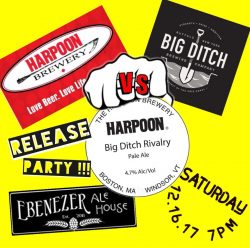 Buffalo’s newest brewery has arrived and they’ve selected the Ebenezer Ale House as one of the destinations to help release their beer to thirsty Western New Yorkers. Pressure Drop Brewing, located in the Barrel Factory in the Old First Ward, will be stopping by on Saturday December 9th for you to try their brand new beers, released to the public for the first time. Don’t miss this opportunity to be one of the first in the area to try beer from Buffalo’s newest brewery.

December 2017 Craft Beer of the Month

Fresh roasted coffee, a hint of cocoa, and a crisp warming aroma. No, it’s not your Christmas celebration filled with holiday treats – it’s the delicious Mocha Merlin coffee infused oatmeal stout, this month’s beer of the month at the Ebenezer Ale House. Firestone Walker Brewing Company’s seasonal concoction, brewed with a little sorcery, is the ideal beer to warm up on a chilly December day in Buffalo. Brewed with some of the finest malts available, Mocha Merlin offers a blend of various warming flavors that culminate in a deliciously drinkable stout clocking in at a modest 5.5% ABV. Grab yours throughout the month of December at the Akron Ale House for only $3.50 a pint. 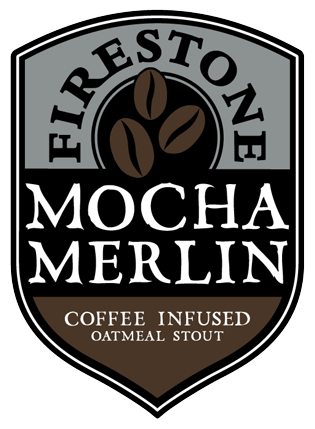 November 2017 Craft Beer of the Month

After a long summer, it’s finally that time of year again as the days get colder and darker as winter creeps on Western New York. But longer nights mean more time to stay out and the best place to do that is at the Ebenezer Ale House with our November craft beer of the month – Long Trail Brewing‘s Hibernator. A Scottish Ale brewed in Vermont, Hibernator offers a robust, malty flavor that will warm you up on a crisp autumn night. Grab a pint for only $3.50 throughout the month of November. 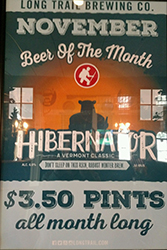 You can help change the face of men’s health, simply by drinking beer! Stop by the Ebenezer Ale House on Thursday November 30th to raise money for the Movember network of charities. A portion of the proceeds from each pint will be donated to the charity and we’ll be celebrating great looking facial hair all night long! If you think you have the best beard or mustache, enter in our contest being judged by local beer personalities, including Tim Herzog and his extraordinary mustache! Win great prizes including Ale House gift cards, Flying Bison growler fills, swag from Armstrong’s Barbershop, Architect For Men, and more!

Can’t make it but still want to donate to a great cause? Donate here. 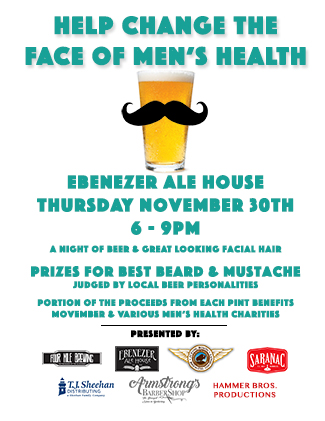 For the first time ever, Samuel Smith’s Oatmeal Stout makes its way to the tap towers and its available at the Ebenezer Ale House. Join us on Tuesday November 7th starting at 6pm as we celebrate the British brewery‘s popular stout making its way to Ebenezer’s taps. The silky smooth consistency and bittersweet finish will help warm up the soul on a crisp November evening. Part of the brewery’s first batch to leave the UK’s shores in the 256 year history of the brewery, you won’t want to miss this special release! 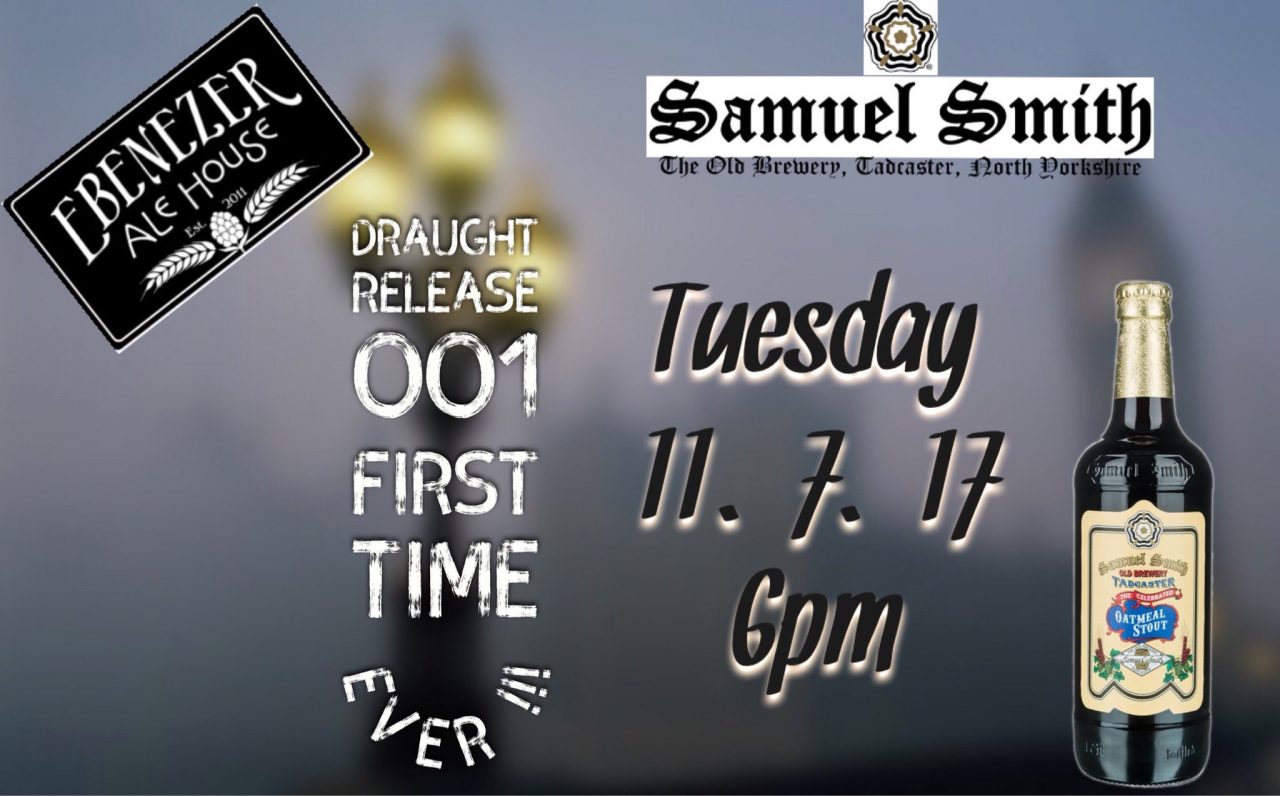 Thursday November 2nd is National Stout Day and we’re celebrating with an all day happy hour. Join us to indulge with some of the best tastes of the season, including New Holland Brewing Co. Dragon’s Milk Stout, Guinness, Victory Beer Donnybrook Stout, and Firestone Walker Brewing Co. Mocha Merlin Stout. Additionally, it’s the perfect Buffalo sports night as the Bills face off against the Jets for Thursday Night Football and the Sabres take on the Coyotes at 10pm. Stop by to celebrate National Stout Day and root on your teams as they continue their run to the playoffs! 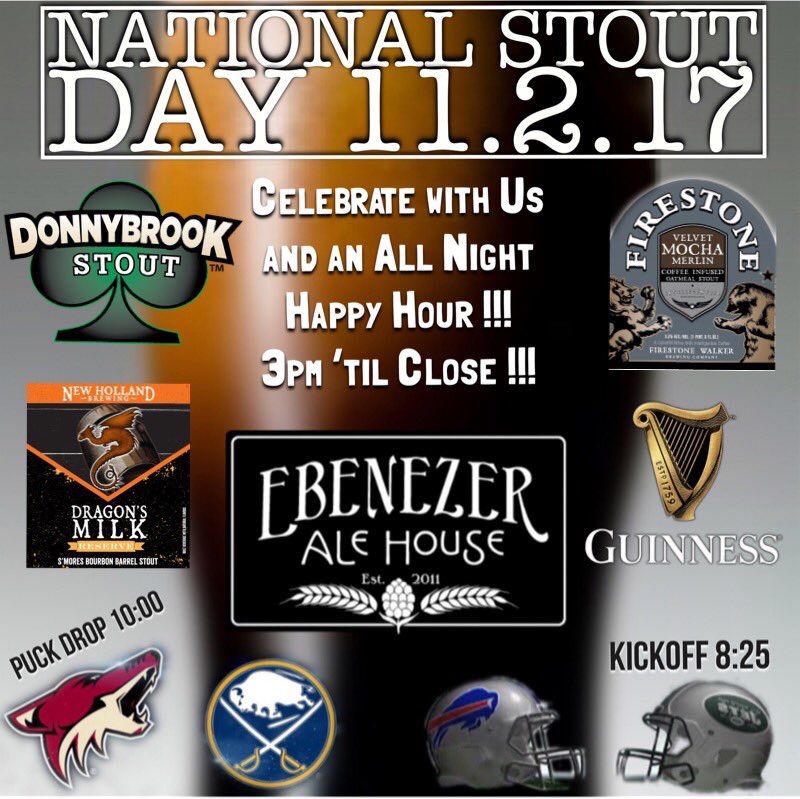 October 2017 Craft Beer of the Month

Celebrate the change of the seasons with Southern Tier Brewing Company’s autumn favorite – Harvest Ale. Brewed with a combination of fresh English hops and cracked barley, Harvest Ale features a caramel malted aroma that personifies fall in Western New York. Grab a pint of fall and embrace the season at the Ebenezer Ale House. Southern Tier Harvest Ale is available all month long for only $3.50 per pint as our craft beer of the month. 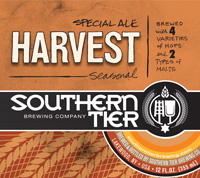